We depart from Welshpool heading north as we follow the River Severn, Britain’s’ longest, as it twists and weaves through the landscape. As we cross the border into England the hills give way to the flatness of the Shropshire plain. This large expanse of countryside stretches on before you for miles. Bordered to the west by the hills of Wales, on a clear day you can see Liverpool and the Pennines to the north, Cannock chase and the Midlands to the east. On route to Shrewsbury via Rodney’s Pillar, we pass by the disused airfield of RAF Montford Bridge, used to train spitfire pilots during the war.

Then it’s on to Shrewsbury, a stunning historic town with over 660 listed buildings. It’s almost an island with the River Severn looping around it and birthplace of Charles Darwin. You will have a bids eye of the Shuts and Passages – a unique maze of narrow alleys which criss-cross the town centre- part of the town’s medieval street plan. We head west again past the Shropshire Hills, an area of outstanding natural beauty, towards the rugged hills of Wales, get your passports ready as you cross back over the border! The border is neatly marked by Offa’s Dyke, built by King Offa in the 8th Century to keep the Welsh Princes at bay, it’s the longest archaeological monument in Britain. Have a look out for Powys Castle overlooking the beautiful Severn valley before landing back at Welshpool. 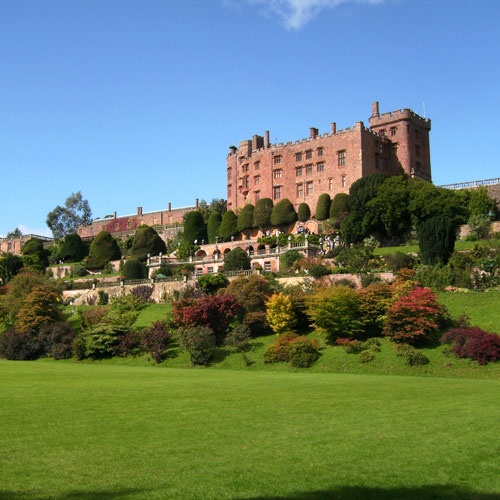